In That Other Dimension is available now in paperback and e-book from Amazon!!

“It’s like Bill and Ted, Dr. Who, and Alice in Wonderland got together and started taking hits of acid. It’s wonderfully hilarious, unabashedly random, and you won’t be able to put it down.”

“An entertaining romp through parallel dimensions that put this reader in mind of early Terry Pratchett.”

“Excellent debut novel by a talented writer. Funny throughout, fantastic imagery and a thoroughly enjoyable read from cover to cover.” 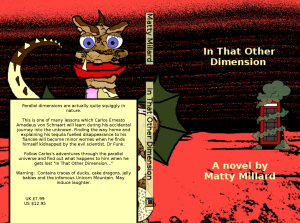 Parallel dimensions are actually quite squiggly in nature.

This is one of many lessons which Carlos Ernesto Amadeus von Schnaart will learn during his accidental journey into the unknown. Finding the way home and explaining his tequila fuelled disappearance to his fiancée will become minor worries when he finds himself kidnapped by the evil scientist, Dr Funk.

“Matty Millard has a way of making you feel you’re sitting there with him as you read: he’s telling you a story but he’s also beside you, pointing out bits, telling you extra things, it’s like having the writer with you and making you smile.” – William Gallagher

One thought on “In That Other Dimension – Matty Millard”